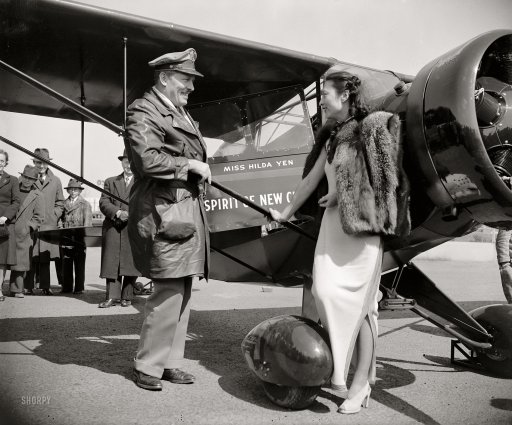 April 3, 1939. Washington, D.C. "Col. Roscoe Turner, winner of speed trophies in the air, dropped down to Washington Airport today with a red high-wing monoplane which he presented to the friends of New China, represented by Miss Hilda Yen, Chinese Aviatrix. The plane, 'Spirit of New China.' was built by the Porterfield factory." Harris & Ewing Collection glass negative.

Hilda Yen, famed "good will" aviatrix, was painfully injured yesterday when her plane "Spirit of China" crashed in a field near Prattville, Ala. She was en route to Birmingham for a banquet as part of her tour of the country to raise funds for war-torn China.

Chicago Tribune May 2, 1939 - Injured in Crash -
Montgomery, Ala., May 1. (AP) Severely injured when her plane, "Spirit of New China" crashed today, Hilda Yen, Chinese girl flyer, regained consciousness in a hospital here tonight and said, "I would gladly die for the cause."

Her monoplane fell near Montgomery in and attempted takeoff from a field where she had landed to ask directions.

Miss Yen, 25 years old, is a niece of Dr. W. W. Yen, former Chinese ambassador to the United States. She was en route from Monile to Birmingaham, Ala., on a tour of America in behalf of Chinese war refugees. Known as China's Amelia Earhart, the girl had flown for Madame Chiang Kai-Sheck and had traveled extensively in her small red ship.

Baha'i World, XV, 1968-73, pp. 476-78...After surviving a plane crash she determined that she had a higher purpose, and she went to the war-torn China in 1942 to help in any way she could, then returned to the United States in 1944...
...In 1945 Hilda joined the Department of Public Information at the United Nations, and traveled all over the United States to lecture and win support for this new world organization...
...Hilda Yen passed away on March 18, 1970.