After tinkering for over three years on my Collegiate, the novelty finally wore off for Pokey Gordon and he asked me to remove the old girl from his shop in Helena, MT.  Club member Tim Talen, who has a hangar in Boulder, MT, about 30 miles south of Helena, came to the rescue and arranged for a Boulder friend of his to rent a truck and haul the project to his hangar.

Tim's is a master restorer who specializes in Interstate Aircraft.  I restored an Interstate Cadet back in the 80's…

When an individual makes the commitment to learn to fly, there are several memorable events that occur during flight training. The very first flight always leaves a lasting impression. Same with the first take-off, or getting the airplane to do what the…

I made an error advising the rego I had reserved. It is VH-POF which was added to the register today. So now we can have "papa oscar foxtrot" calling. I have not found any handling notes or Flight Manual with the LP-65. Is anyone able to advise the status of such documents please. Remember, "its always tomorrow in Australia". Regards, Rob.

Our Porterfield, LP-65 N37733, purchased from Don Bishop, Bowie, Texas, arrived in Australia this week and came out of the sea container in Sydney for road transport to Bathurst NSW. Some hold up to get through customs, where the container was x-rayed, and quarantine looking for all sorts of bugs trying to escape from the US. Amazingly, nothing was damaged in the slightest during the long voyage. Job now is to get the aeroplane assembled and finalise the paperwork to get full registration…

Jay Underdown took his LP-65 Porterfield NC32417 to the Alton Illinois airport  (ALN) for their wings and wheels fly-in a few weeks ago and received the Best Antique 2011 Trophy. NC32417 is also co-owned with Larry Lightstone and Mike Weidhaas and based in O Fallen, Missouri. 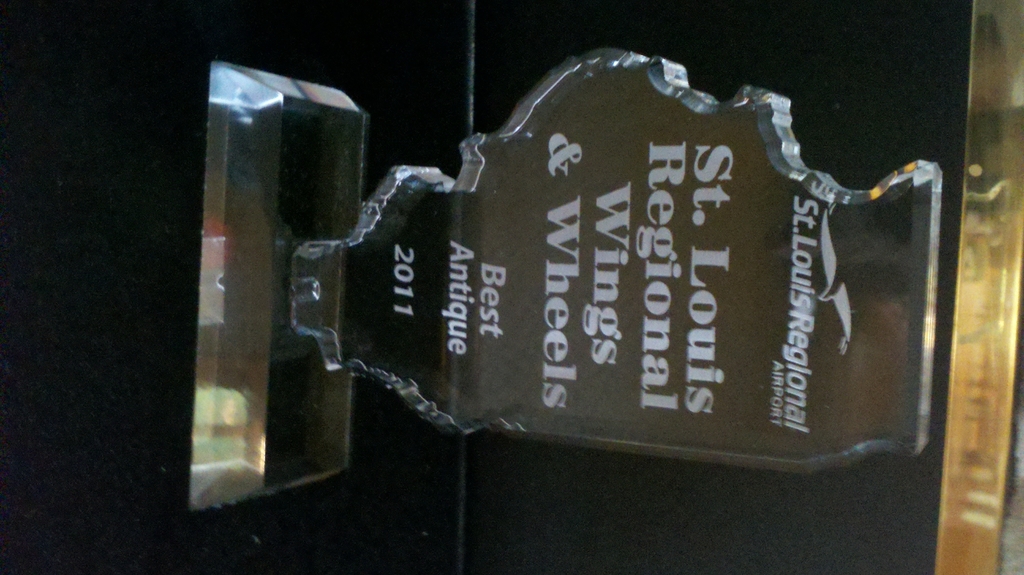 Don Siemens of Airman Acres in Collinsville, Oklahoma and Owner of a Porterfield LP-65,

The first one is 15 minutes long.

Allen Deiter did a real good job on…

See Jay Underdown and Partner's (Larry Lightstone and Mike Weidhaas) Lone Eagle Porterfield at the Antique Aircraft Associations Annual Blakesburg, Iowa Fly-in. It is on the Part 2 Saturday Roll Call picture video of the link below at minute 7:32.

Does anyone have these cowls or know who might be making them? Secondly, Joe Rankin tells me that there is a factory drawing showing the installation of a battery system for the CP65 and 75. Joe said he would look for it but her hasn't come up with it yet. Does anyone have one I could get a copy of? And finally can someone tell me where to get a stencil or decal of the Porterfield-Turner emblem. Thanks Darryl Coit dcoit@mchsi.com, Joplin, Mo.

I have a source for shock discs

I recently had some very nice shock discs made by a local commercial gasket company. They are made out of neoprene rubber and look great. They were cut using a CNC water jet and are made exactly to the Porterfield drawing. I chose a shore A value of 60 for my discs but I haven't tried them yet since my CP65 project is not quite finished. They may be a little stiff. They can make them in any hardness that you want. They are not a PMA part of course but you can have them made under your… Continue

Hello Tom.
Paul and I had a great time at Airventure, despite a bit of a wobble when we arrived and they were not allowing RVs in due to the waterlogging, but we blagged our way in and found a dry spot. We were disappointed there were no Porterfields, not surprising considering the previous week's weather I guess, although we did meet a young chap in the bar who had flown one! We met some friends who had flown a C180 in, we were at their plane when we witnessed the Jack Roush…

After five months of planning and work, I finally pushed my Porterfield 35-70 project into the hangar at Hollister today. I'll try to put together some photos of the plane. It also came with several copies of Leblond/Ken Royce manuals and other Porterfield material in which some of you may be interested.

To one and all, I have purchased a porterfield project s/n 1006 with a Franklinn 65 no.101336 so the logs say. The porterfield went through the dingweeds and trees I would appreciate an drawings of sheet metal parts and a engine mount actual or drawings. The brakes I have are the original cable spring type, is there a better stc brake or do I find parts? Does anybody have a recommended faberic system? I also recieved all of the maintenance records from the beginning no1006 first flew on 9/3/41… Continue 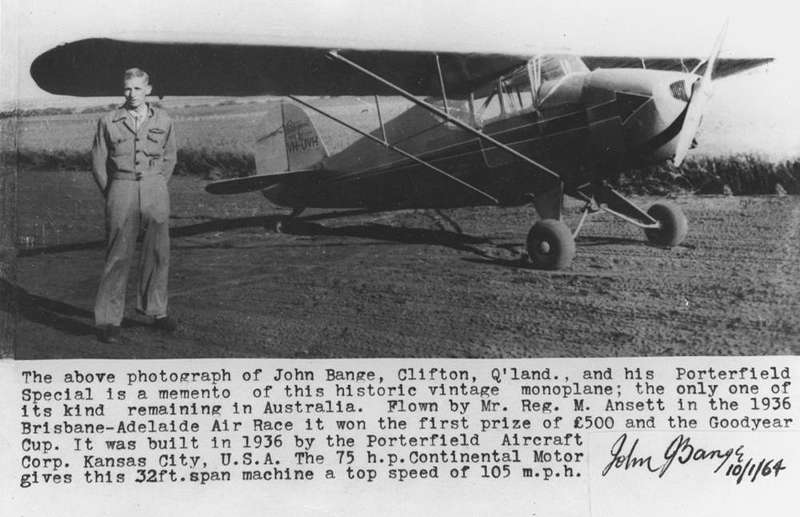 John Bange standing beside his vintage Porterfield Special monoplane, UH-UVH on his property at Back Plains, Queensland. A pioneering glider pilot, Bange designed and built the first enclosed-fuselage glider which made its maiden flight over Clifton on the 27 October 1935.… 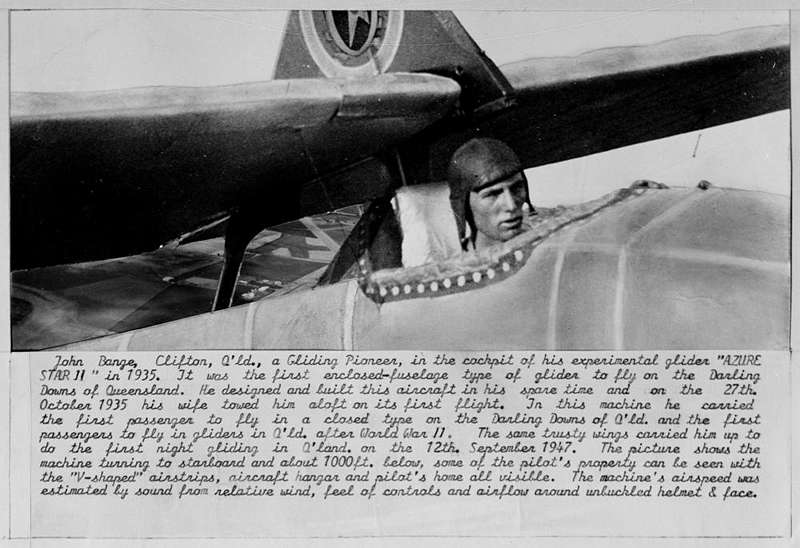 The Air Mail mural was designed and painted by Mark Pestana, noted test pilot and Tehachapi artist. On May 15, 1938, The U.S. Postal Service issued a new Air Mail stamp as part of a national celebration for the 20th anniversary of the first U.S. Air Mail. Tehachapi marked the occasion with its inaugural Air Mail flight to Bakersfield. Harry Beauford, Jr., a Tehachapi resident and pilot, is shown standing next to his plane at Tehachapi…

Myron Collier was born June 8, 1930, on a farm near Butler, Ohio. He built model airplanes and, though he didn't know any pilots, knew he wanted to be one. An hour's worth of instruction was too expensive, so he paid for 15 minutes at a time. What he lacked in finances he made up for in determination, and by age 23 he had accumulated private, instrument, commercial, multiengine, instructor and ATR ratings. He financed his by teaching flying, and entered the…